just a quickie to let you readers know that i've got three faerie dolls on mt etsy site here: http://www.etsy.com/shop/fayeven  for $15 off their regular price.  it's spring cleaning for my shop and i need to make room for new product!

tanks for looking and have a fantastic day!
-sarah
Posted by Unknown at 7:53 PM 2 comments:


it all started with a dalek. 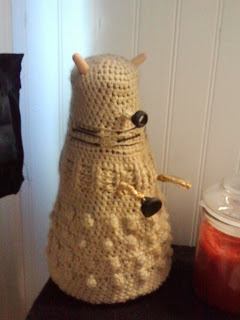 some years ago i crocheted a dalek and then decided it needed to be a toilet paper holder....  i got the pattern from this lovely site PDF here

here you can see the inside where i reinforced it with plastic canvas and felt. 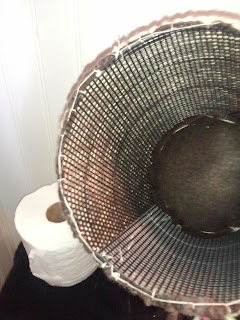 we used it for a while, but it seemed so out of place in our otherwise normal and fairly organic bathroom.  it was done in greens and browns, with a matchstick window shade and twiggy baskets and a leafy print shower curtain complete with leaf hooks.  the poor dalek looked so incongruous there.  when it came time to renovate the room i knew what my inspiration piece would be for the new decor.

we did a lot of work in this room before the decorating as there were lots of repairs to do.  we put in a new subfloor, new linoleum, new shower surround, new sink, new cabinets,new mirror, new toilet roll holder, new towel holders..... about the only things we kept to the original were the tub, the toilet and the window.  you see, due to some old water damage, we had to take down the tile.  all of the tile.  the room was tiled on all four walls up about 4 feet in a sickly pinkish beige that i never, ever could stomach.  these tiles also included built in towel racks and TP roll holder.
because the walls were so damaged from removing the tile we opted for wainscoting instead of paint. and yes there were many references to this monty python sketch   when we put it up.

here you can see the cool tub detail.  our house was built in 1947 and the tub is original.  i liked these lines a lot and tried to echo them in the fixtures we found.  also, note the blood red chenille rugs.  when thinking about remodeling my husband and i were playing bio shock 2, a game with a vintage sci fi look.  i used a color scheme that felt this way to me, it also goes with the older house as well as the whoniverse. 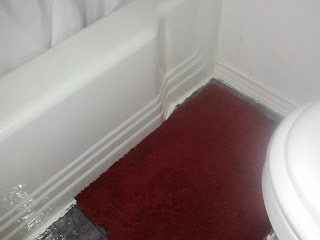 i picked this light fixture because it reminded me of a vintage rocket ship. 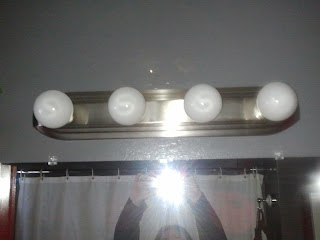 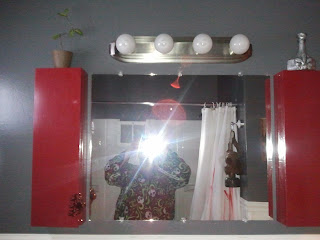 and for the last bit of boring non-whoniverse related stuff, the sink.  just a little pedestal we found with some similar lines.  of course i needed the classic retro porcelain taps. 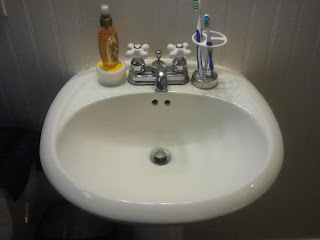 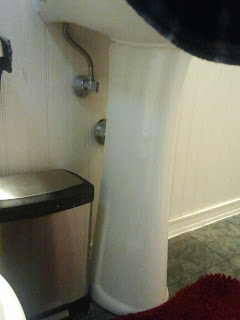 and now onto the fun stuff!
this is the cutting of her grandfather that Jabe Ceth Ceth Jafe from the forest of cheem gifts to the doctor and rose in the dr. who episode  the end of the world.  pictured in the lower left hand corner of this still.  i made this from a twig i cut and re glued together, some faux leaves, and a peat pot that i sealed with mod podge to protect it from moisture. 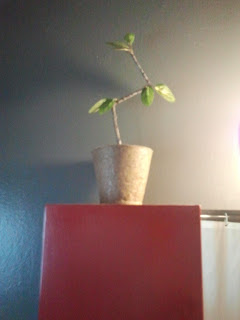 i couldn't find a whoniverse themed shower curtain.... and while searching i fell in love with this little beauty from thinkgeek.com. 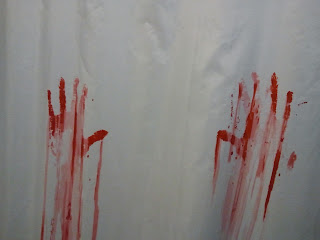 i realized then that in order to be consistent i needed to pull from the scariest parts of the whoniverse, especially including pieces from dr. who's darker, deadlier, more grown up cousin, torchwood.

which brings me to this.
the  bottle from the torchwood episode from out of the rain. i still really need to track down an old film canister to place behind this to complete the effect.  i couldn't find the proper shaped container and am not quite happy with the finished product so i may actually redo this at some point.   this was a glass vinegar bottle i painted.  the raised detail is polymer clay painted the same as the bottle. in real life this actually looks much more metallic.  i used a metallic paint after all.  also at some point i need to get my hands on an old metal film canister to place behind it. 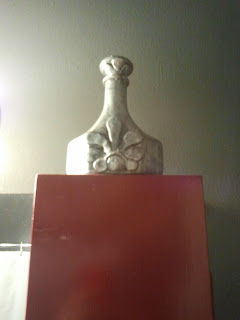 a gas mask from the doctor who episodes the empty child and the doctor dances.  no i didn't make this.  it's something we've had in our costume bin for years.  my husband picked it up at a military surplus store when he was still in high school.  in digging it out of storage for use here i realized, not for the first time, that we probably aren't your average couple.  it's not many times when you can hear yourself calling, in a cheerful voice, "hon, have you seen the gas mask?" 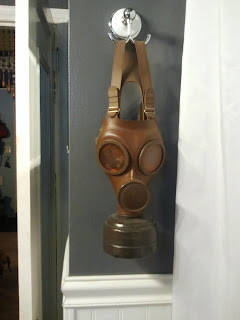 the weeping angel, originally from the doctor who episode blink that i posted about here. 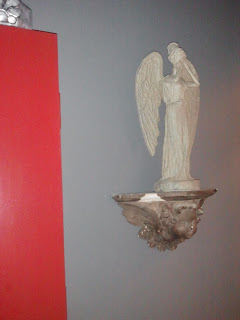 and here's how i've 'trapped' her with mirrors.... 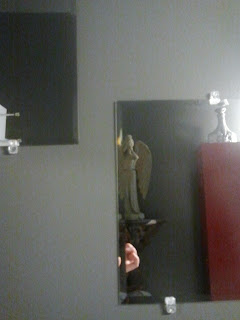 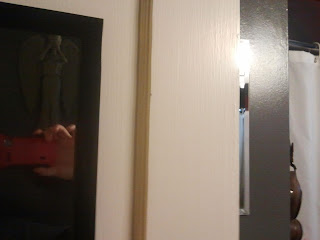 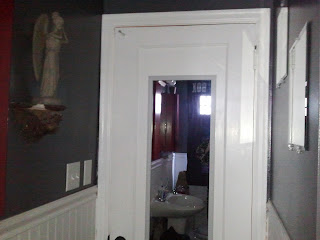 in that last photo you can see the TARDIS quilt covering the window.  here it is during the day.  the windows only have one layer of fabric and no batting so the sun comes through  just like the lights in the 'real' TARDIS. 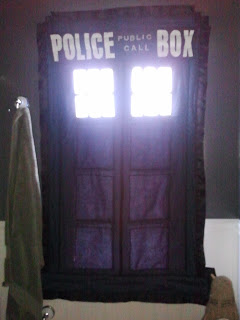 some detail shots here.  i used cording to outline the recesses in the wood and bias tape for the separation line between the doors.  also, to add more dimensionality, i omitted the batting in the recessed rectangles, although it's hard to see here. 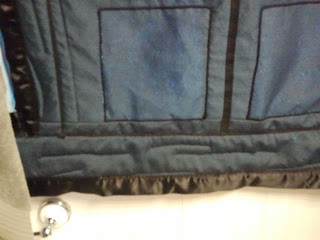 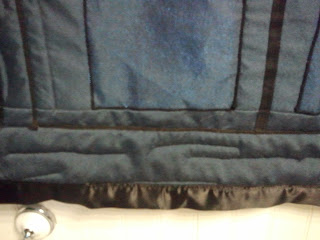 the lettering is just some iron ons i found at the craft store. 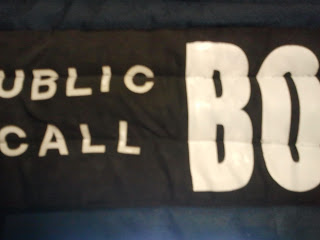 and this is all i have so far.  i have a couple more project ideas in the wings, like jack's wrist strap and possibly something really creepy... my husband half-jokingly suggested a face of bo toilet seat cover.  there's something so wrong and so right about that idea i just might have to do it.  if and when that happens you bet i'll post about it!

as always, thank you so much for looking!  hope you have a great day,
-sarah