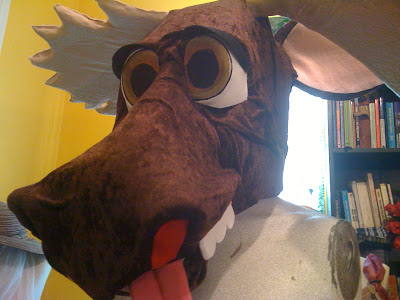 i wanted to share with you a project i finished recently that was so much fun to make! i was commissioned to make a moose costume for a local event. the only guidelines were "the goofier the better" and it was requested that he have chest hair ;)

well, i tell you, i was super excited, but i had *no idea* where to start for the head portion. i have lots of experience under my belt both in costuming and plush creatures, but i'd never made a mascot type head before..... so i went to the internet! i found the most *amazing* site by an incredibly talented young woman that totally saved my day. she has a bazillion detailed tutorials and her pieces are just spectacular. check her out at www.matrices.net despite fabulous tutorials this was still a learning process for me so there was still some trial and error. sure, there's stuff i would do differently next time, but all in all i'm pretty proud of the results. 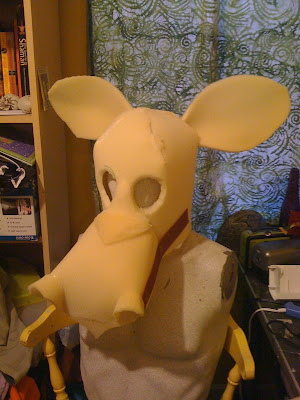 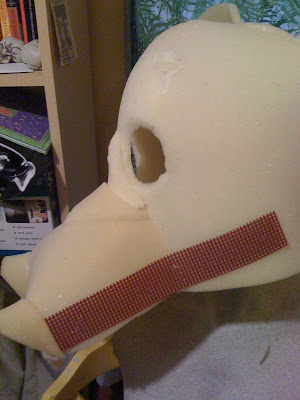 here he is in his first phase.... so far he's made up of 1/2" foam and hot glue (i used *so much* hot glue on this project.... you would not believe!) the red strip on his cheek is plastic canvas, used to stabilize the piece yet still be flexible. 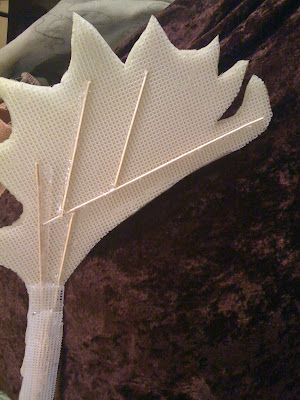 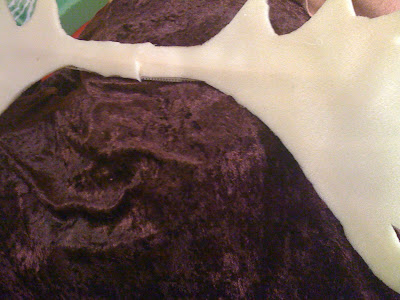 next were the antlers. i cut the shape out of more plastic canvas and covered one side with 1/2" foam. then on the canvas side i glued wooden skewers, cut to size, and added more canvas to stabilize the middle, then i covered this side with 1/4" foam. 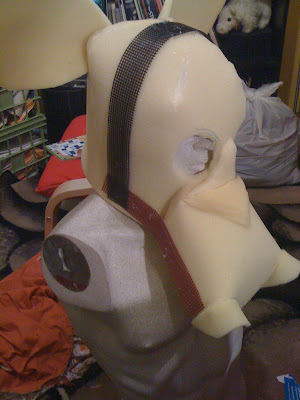 here he is with more canvas to carry the weight of the antlers as well as to make them easier to attach. 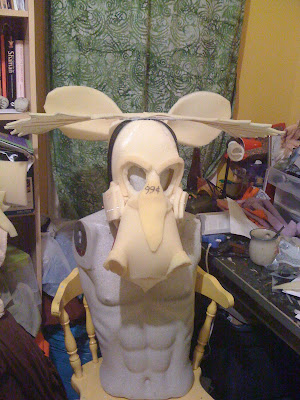 antlers attached, and more foam added to give his face more dimension and personality. i love these pics on my mannequin, Stone, they are just so absurd! 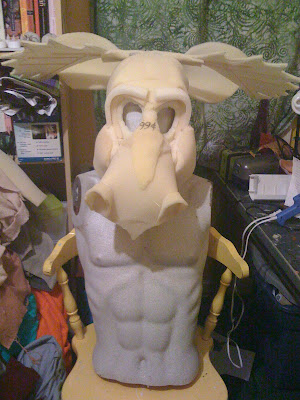 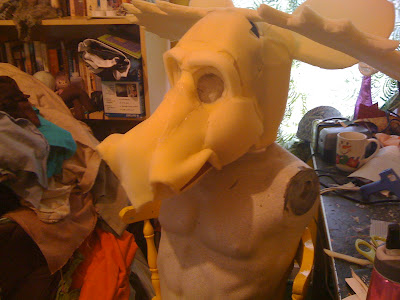 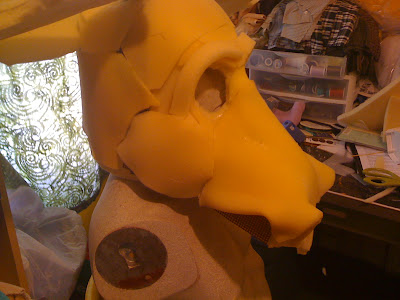 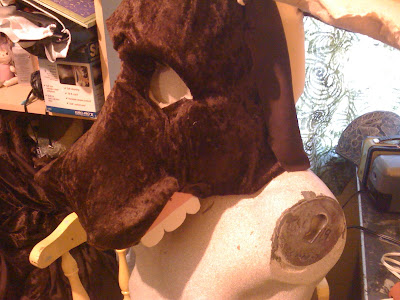 now onto "furring." instead of faux fur i used a stretch panne velvet as i was never satisfied with the furs available. the teeth and gums you see here are made from more foam. the colored craft foam kind this time. 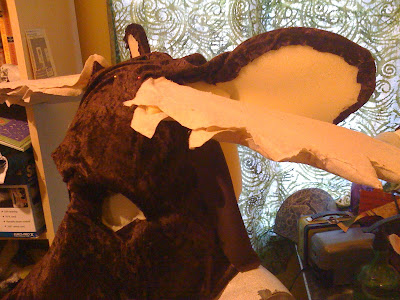 and here is where i started covering the antlers. they are covered in flannel. 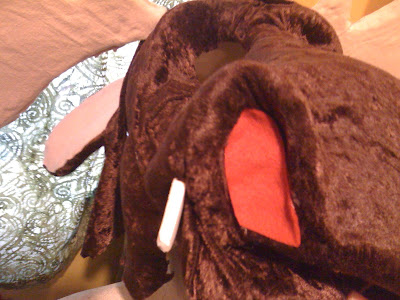 and now he has ears and nostrils, both covered in felt. 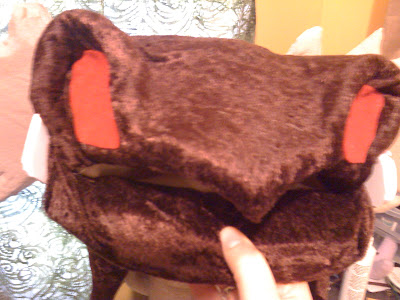 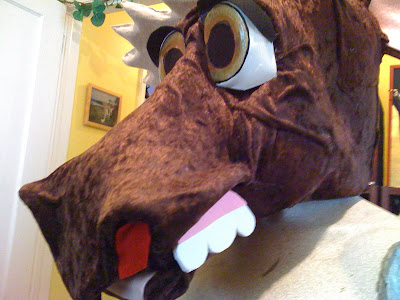 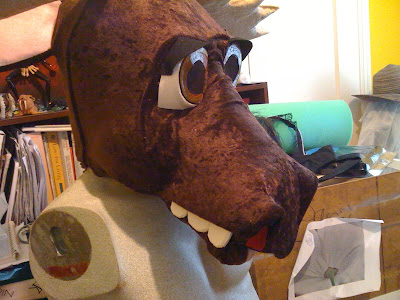 mouth lined with more felt and he has eyes now.... these are made from plastic bowls... yes you read that right! this is the part i would really change next time. i didn't use the proper bowls as i was in a time crunch and after running a few places i got the best i could find at the time. i wish i'd found something bigger so i could have a smoother curve instead of the ridge he has, but you live and you learn. 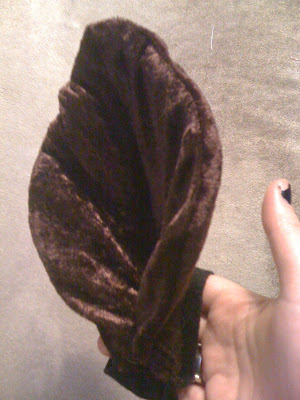 here's his tail. it's designed to be threaded through a belt in the back (that's what my hand is going through) 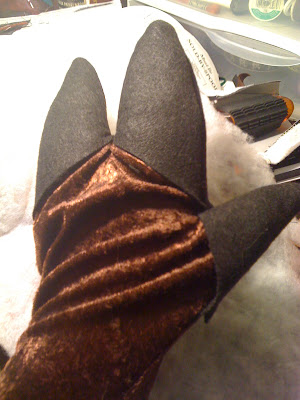 and this is my third and final attempt at a moose hand.... sometimes i just don't understand why some parts are so hard. this was supposed to be the easy bit, but i was over complicating it. they ended up being just simple gloves out of the stretchy panne and felt. for some reaason i didn't get a final finished picture, but the only difference was that i hand sewed the felt onto the panne at the overlap, making them more like one piece, subtle, but effective i think. 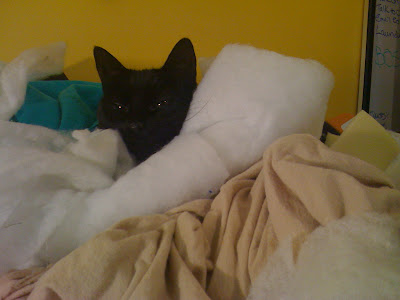 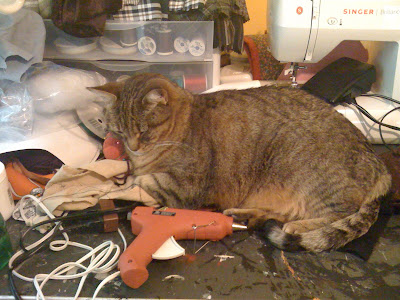 and two shots of my "helpers".... one looking sooooo comfy i didn't have the heart to move her, the other exuding his macho nature by using a pincushion as a pillow! weirdos! (and don't worry, the glue gun was cold ;)

i realize now that i didn't get a pic of the dickie i made to put under the lumberjack shirt.... it was really simple, made mostly of the panne, accentuated with a black faux fur i found for chest hair.

here he is in all his glory: 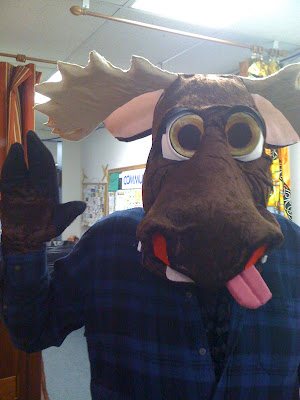 thanks for reading, and have a wonderful day!
-sarah
Posted by Unknown at 10:16 AM 5 comments: